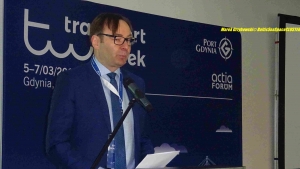 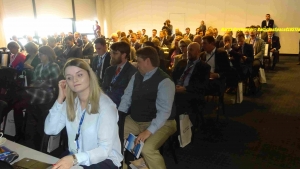 Around 200 participants gathered during the first day of the ninth edition of the Transport Weeek conference. The event, held at the Courtyard by Marriott Waterfront hotel in Gdynia, Poland, on 5-7 March, 2019, focused on port investments, in-depth analysis of the port market, accompanied by an outlook for the near future.
The main event kicked off with an official speech by the Mayor of Gdynia, Wojciech Szczurek. The Mayor underscored the role the port played in the birth of the city and underscored the importance of cooperation between the port and the city hall. Modernization of the hinterland has also been mentioned as one of the highest priorities.
Speaking on behalf of Ryszard Świlski, the Vice Marshall of the Pomeranian Voivodeship, Karolina Lipińska underlined the role Transport Week plays not only as a source of knowledge about the market but also a great way to establish new business contacts. She also mentioned the impact maritime transport has on the development of the region and emphasized the rising competitiveness of ports in the region, reflected in the constant growth of cargo turnover. 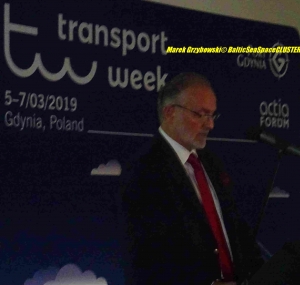 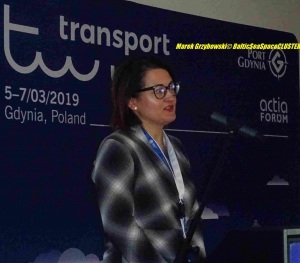 The port market is as complex as markets get. Bogdan Ołdakowski (Actia Forum), gave a brief description of the dynamics governing the development of the port sector, with a special focus on the Baltic Sea region, characterizing the latest movements on the container, ro-ro and ferry markets. He also offered a glimpse into the situation in the Polish ports, which are enjoying a long period of growth, resulting in a quite extensive investment programme as shown by a later presentation by the Port of Gdynia.

Finding ways to support port development and competitiveness of the ports was one of the focus points of the event. Christopher Quinn (Wexford Strategies) highlighted the importance of port to port partnerships and some untapped potential that might lie hidden in the shadows. Quinn stated that it is very important to not view ports in a vacuum, but as a part of a broader community also including the cities and business communities they are connected to. A good understanding of the engagement and role of these communities in the operations of the port you’re looking to partner with is one of the keys to a successful partnership.

James Kyritsis (Drewry) switched the attention of the audience from the US towards Chinese investments in European ports and the impact they may have on the Baltic Sea region. Opportunities created by China’s Belt and Road Initiative (BRI), which remains supported by the Chinese government, are linked, among other things, to the growing interest of the country’s investors in global projects and the fact, that the Baltic Sea provides a route to North Europe, accessible to Chinese ports. That said, these investments should be carefully assessed, as experience shows that not all of the projects under BRI are financially viable.