News
You are here: Home1 / News2 / Events3 / BSSC in the Innovation Day 2019 in Blekinge Tekniska Högskola in Karls... 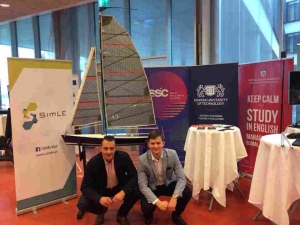 Representatives of BSSC (dr Paweł Chyc and Adam Labuhn) took part in Innovation Day 2019 in Blekinge Tekniska Högskola in Karlskrona.The purpose of the trip organized by Dr Pawel Chyc was the promotion of an autonomous sailing boat developed by the SIMLE team, the purpose of which is to sail the Atlantic Ocean in an autonomous manner, which would be an unprecedented event on a global scale. The mission received logistic support from Mrs. Magdalena Pramfelt – Honorary Consul General of Sweden in Gdańsk.