SeaTech Conference was held in Gdańsk in the STARTER Incubator on June 18 this year. About 60 representatives of the administration and business, including clusters, took part in the conference. A special session was made available to start up.

The guests were welcomed by dr Tomasz Szymczak, President of the Board of the Gdańsk Entrepreneurship Foundation, who spoke about the role of supporting entrepreneurship and innovation in the blue economy. The integration of the activities of companies in the Smart Specialization of Pomerania, in which companies focus on the implementation of innovations in ports, maritime transport, logistics and offshore technologies, serves this purpose.

Pomorskie supports all activities aimed at increasing the region’s competitiveness in the maritime economy – said Karolina Lipińska, Deputy Director of the Department of Economic Development Marshal’s Office of the Pomorskie Voivodeship. We have launched a number of programs designed to develop entrepreneurship, we support small, medium and large maritime economy companies. The essence of the program supporting production for export was discussed comprehensively by Michał Szaraniec, Pomeranian Export Broker, who gave examples of promoting Pomeranian maritime companies and ICT on the international market.

Mr Mark Simmonds, Head of Policy & External Affairs at the British Ports Association, talked about various aspects of Maritime and logistics industries in the time of Brexit. He presented a number of aspects of the activities of the ports of Great Britain and Northern Ireland. A very important information is that 44% of UK exports are directed to the European Union, and from the EU to the British Isles, literally 53% of imports go by sea. 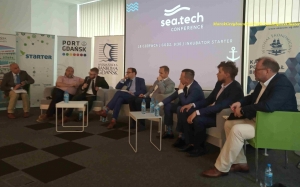 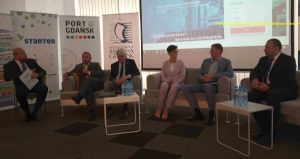 The next panel discussed “Technological aspects in the Polish maritime industry”. This topic was discussed by: Jowita Zielinkiewicz, Director for Innovation and Funds Acquisition at the Port of Gdansk’s Maritime Administration, Maciej Krzesiński, Director of Marketing and International Relations at Gdynia Maritime Port Authority, Michał Laskowski, Business Development Manager at Gdynia Maritime Agency, Inacio Golebski, Director of the DNV-GL Classification Department, Grzegorz Kilarski, Member of the Board at NNT Lab.

Then, STARTUP PITCHING took place, in which representatives of companies presented innovative solutions useful in the field of maritime transport, ports and sea research. A great summary of the conference was the presentation of the innovation implementation in the Port of Hamburg by Maciej Brzozowski, director of Hamburg Hafen Marketing in Warsaw, who also explained the essence of the Smart Port concept implemented in Hamburg. Photo: Marek Grzybowski