News
You are here: Home1 / News2 / News3 / CRIST and StoGda winners of the CEMT award 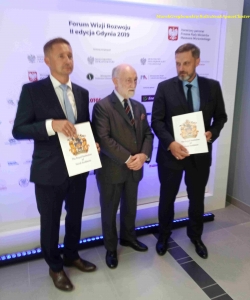 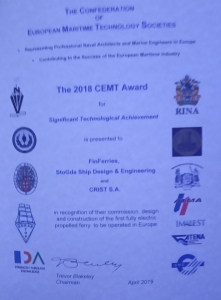 FinFerries, CRIST shipyard and StoGda Ship Design & Engineering design office have won the CEMT 2018 award. The shipyard, design office and ferry operator Electra have received the award for outstanding contribution to the development of innovation in European marine industries. The award was granted for the design and implementation of the first fully equipped passenger-car ferry with electric drive in the European Union. The award was presented in Gdynia during the second day of the 2nd Development Vision Forum.

CEMT is an association of European scientific and technical associations from 10 countries. The CEMT award can be granted to an individual, organization or association at the request of a member of CEMT – an organization representing a given country. The application for the prize was submitted by the KORAB Society – said Trevor Blakeley, chairman of the CEMT Council. 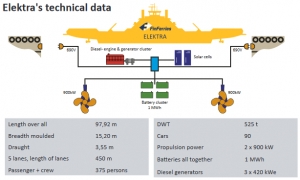 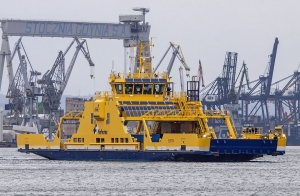 This award confirms our competence and the fact that we are a definite leader on the market for the construction of innovative, prototype and unique ships – said Bartłomiej Kopczewski, Managing Director of CRIST. The CEMT award confirmed that Polish technical thought and Polish innovative solutions are used in the shipbuilding and European maritime transport industry – said Tomasz Świątkowski, vice president of StoGda Ship Design & Engineering. Photo: FinFerries, Crist, Marek Grzybowski

The ferry was delivered to Finnish state owned Suomen Lauttaliikenne Oy, operating under a trade name of FinFerries. On May 29 2017, the ferry was officially christened in Turku, Finland. The ship is equipped with a set of batteries with approximately seven years operational life. Charging the batteries will take place each time during loading and unloading, and the time needed to do this is just 7 minutes.  The ferry will have the possibility to utilize one or more of the three diesel engine to support the onboard batteries which will serve as an extra boost when breaking and travelling through ice. The ferry is then operated as a plug-in hybrid  vehicle. More info: http://www.polandatsea.com/first-polish-built-hybrid-ferry-delivered/