Transport of fish and seafood from marine farms straight to the processing plant – this is the job of a new life fish carrier manufactured in CRIST shipyard. Fully equipped, the second in a series unit of this type, was transferred to Norwegian shipowner Arctic Group AS on Sunday. 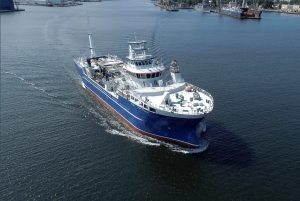 NB SC 75/2 – a life fish carrier, the second in the series and the third in a history unit built for Arctic Group AS, a Norwegian company specializing in the operation of vessels for the fish farming sector. The company delivers its products to both business and private customers – all over the world. The vessel used for transporting fish and seafood from marine farms to the onshore processing plant will operate, among others, in the Pacific and Atlantic Oceans. The main purpose of the unit is to transport live fish from fish farms to factories (further fish processing). The ship was designed to transport live salmon, trout, cod and other marine fish species. Live fish will be stored in tanks equipped with sea water circulation, water treatment system with oxygen and an automatic ozone decontamination system. Loading and unloading of fish will take place using the vacuum method.

Thanks to the appropriate dimensions – length 75 m, width 15 m, NB SC 75/2 is able to accommodate up to 3 thousand. m six. specially treated water for transporting live fish. The weight of the hull is estimated at over 1,000 tons. The unit will be operated by a crew of ten