News
You are here: Home1 / News2 / News3 / The Port of Gdansk and the Gdansk Lech Walesa Airport working together... 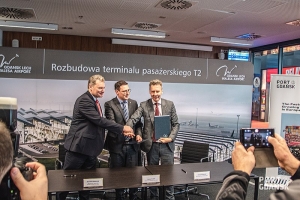 The idea of establishing such cooperation came up when the Port of Gdansk Authority developed the concept of the construction of the Central Port, the project of which involves, among others, the construction of a terminal for passenger ships. In combination with the modern infrastructure of the airport, this maritime investment opens up a chance for creating a place for the exchange of passengers and crews in Gdansk. The aim is for passenger cruises of the Baltic Sea to start and end in Gdansk. In order to reach this goal, both companies should cooperate closely, so that tourists receive the best possible service. The introduction of this solution will make it possible to make better use of Gdansk’s hotel facilities, too. The cooperation between the ports ultimately assumes improvements in passenger traffic between the port and the airport in terms of check-in procedures.