News
You are here: Home1 / News2 / News3 / A voyage to Antarctica on the Norwegian expedition ship MS Roald Amund... 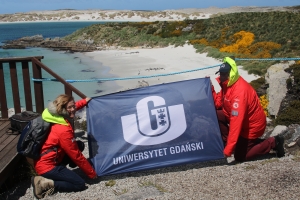 Professor Tadeusz Palmowski from the Institute of Geography of the University of Gdańsk spent the end of November and the first half of December 2019 participating in an expedition to Antarctica. The journey began and ended in the Chilean port of Punta Arenas. The expedition took place onboard MS Roald Amundsen, a modern hybrid expedition cruise ship in service since 2019. The vessel is specially designed and adapted for cruises in polar waters, hence the name of the ship’s patron. It is a convenient base for nature and travel lovers to explore exceptionally spectacular places in the most sustainable way. Onboard is a Science Centre equipped with high-class microscopes for biological and geological research and an abundant library dedicated to the Arctic and Antarctica.

The voyage led through the Beagle Channel and the first stop was Cape Horn. Then, after crossing the Drake Passage, the ship docked at Yankee Harbour on Greenwich Island in the South Shetland Islands. The crew could first set foot on the Antarctic continent at the Argentine Brown Antarctic Base. The next port of call was Danco Island quite near a colony of Gentoo penguins. The crew took a boat cruise among the icebergs in the area. It was also where we managed to take fantastic underwater photos with an underwater drone. A voyage to Antarctica, photo. prof. T. Palmowski