GreenMarE, NatCon, SeaTech conferences and numerous thematic webinars organized by exhibitors took place during the fair. The BlueEconomy https://www.eblueeconomy.com/ portal at the Blatic Sea and Space Cluster stand also had its logo and link on the InterMarE.

We have been preparing for over a year and the fair is a success – said Andrzej Bojanowski, President of the Gdańsk International Fair SA. on the pages of www.gospodarkimorska.pl. 220 exhibitors and almost 800 visitors took part in the InterMarE Balt Military Expo 2021 fair. The stands were displayed 3228 times.

The participants held about 170 business meetings in the Matchmaking zone. About 1,500 people took part in the on-line conferences. 532 people registered at NatCon, 447 people signed up at GreenMarE, and 450 people attended the Sea.Tech conference. Baltic Sea and Space Cluster received an award for promotional activities at the stand during the InterMarE South Baltic fair.

The InterMarE South Baltic fair is the final result of the project “Internationalization of South Baltic maritime economy” implemented since 2017, in which partners from Poland, Sweden, Lithuania and Germany participate. The Baltic Sea and Space Cluster participated in the project as a supporting partner. The cluster transformed from a business environment organization to a project HUB. BSSC focuses on knowledge transfer and creation of innovation through the integration of ICT, space and maritime technologies. The cluster organized B2B meetings and webinars on innovations in the blue economy for 3 days of the fair.

The goals of the project implemented under HORIZON 2020 were presented by Clémence Le Corff, from the strong French maritime cluster Pôle Mer Méditerranée – Toulon Var Technologies (France). The principles of obtaining funds for innovations in blue economy were presented by Diego Carballo, from the Aerospace Valley (France). The potential and achievements of their clusters were discussed by representatives of clusters from Spain: Leire Balzategui from MLC-ITS (Clúster de Movilidad y Logística de Euskadi), Aitor Corchero Rodriquez from EURECAT and Sergi Comte from CWP (Catalan Water Partnership). Andrei Kelemen from the Romanian IT cluster CLUJIT (Asociatia Cluj IT) and Christina Garoufalia from the Greek cluster hub Corallia Clusters Initiative / Research Center Athena spoke about the use of digital technologies in maritime industries. Marek Grzybowski informed about the activity of the Baltic Sea and Space Cluster as a hub for innovative projects.

BSSC ZEVinnovation Day was organized to promote the innovative HUB for the production of zero-emission ships. 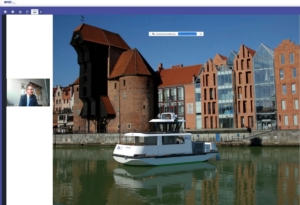 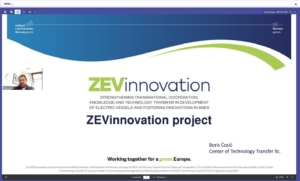 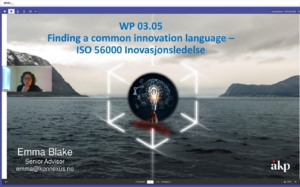 The ZEVinnovation project was widely presented by Boric Cosic from Croatia, director of the Center of Technology Transfer. The educational and research potential of the Faculty of Mechanical Engineering and Shipbuilding of the Gdańsk University of Technology was presented by prof. Mariusz Deja, vice-dean. Scientific projects and student groups activity related to the construction of electric ships were presented by prof. Wojciech Litwin, director of the Institute of Ocean Engineering and Ship Technology. Emma Blake from Norway, Director of Konnexus, spoke about standardization in innovation activities.

It is a platform to start joint research as a basis of a joint project of universities from Croatia, Norway and Gdańsk University of Technology – said Prof. Edmund Wittbrodt from the Gdańsk University of Technology. Innovative solutions and activity of the members of the Baltic Sea and Space Cluster were presented during the BSSC Innovation Day. This day was of particular interest to representatives from Norway.