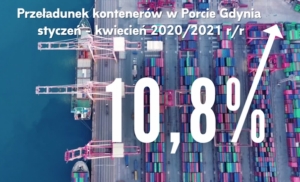 This is a very good forecast for the rest of the year. In the analysed period, the Port of Gdynia recorded growth mainly in the cargo group of Oil and Oil Products +75.8% y/y, Coal +20.8% y/y, General cargo +10.8% y/y, including an increase in container handling to the level of 313 316 TEU, which means an increase of +10.79% y/y. All the above data, as well as the observed trends indicate that the ongoing investments, such as deepening the port channel, construction of the Outer Port, construction of the Public Ferry Terminal, as well as investments in storage yards in the western part of the port are justified. The systematic growth that we have observed in the recent history of the Port of Gdynia guarantees that the undertakings carried out and planned will be well used.