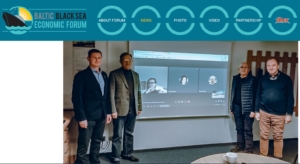 The Baltic Sea & Space Cluster is a key cluster in Central and Eastern Europe, in the Baltic Sea region. Recognized in the maritime industry globally, it actively cooperates with clusters in Asia, South Africa and the United States. The BSSC cluster is an active member of the European Maritime Cluster Network and the UN Global Compact, whose cooperation is coordinated by the European Cluster Cooperation Platform.
The expansion of the business profile to the space sector and the creation of a cluster of the Baltic Sea and space were carried out in 2018. Support for this cluster was expressed by the Space Sciences Committee (Polish Academy of Sciences / Gdańsk Branch), the BSSC Student Cluster and the University of Business and Administration in Gdynia.
The aim of the cluster is to support innovation and development in research, entrepreneurship, governance and self-government, primarily related to the Baltic Sea Region and the World Ocean, land and water bodies along the Vistula and Odra rivers.
During the working meeting there was a detailed discussion of possible formats and areas of cooperation between BSSC and the Baltic-Black Sea Economic Forum. It was noted the importance and significant prospects for the development of this cooperation. At the same time, special emphasis was placed on the expediency of using the synergy of the existing potential of the parties in favor of their partners’ development. In particular, it was done to ensure more effective cooperation and development of cooperation in the transport and logistics segment of the Baltic-Black Sea Economic Forum partner network from the Baltic Sea (Polish port of Gdynia and Lithuanian port of Klaipeda) to the eastern shores of the Caspian Sea (Kazakh port of Kuryk and international seaport of Turkmenistan) and the countries of Central Asia, where after the recent accession to the agreement on “dry ports” the UN has significantly strengthened one of the key positions of Uzbekistan.
Special attention was paid to the importance of cooperation in science and maritime education, where the basic partners of the Baltic-Black Sea Economic Forum in the development of an international partner network of maritime academies and universities are Kherson State Maritime Academy with its science park and Lithuanian Maritime Academy. It is advisable to strengthen this basic foundation by using the partnership potential and additional communication capabilities of Szkoła Morska Sp. z o.o.
Joining the basic foundation of the international network of partner maritime academies and universities from Gdynia was marked as the formation of an additional mechanism for implementing the initiative of the Foreign Ministers of Poland, Ukraine and Lithuania, called the “Lublin Triangle”. In the format of implemented by the Baltic-Black Sea Economic Forum partnership initiatives, where cooperation is initiated at the level of enterprises, institutions and organizations of Gdynia and Pomeranian Voivodeship (Poland), Kherson and Kherson region (Ukraine), Klaipeda and Klaipeda district (Lithuania), the “Gdynia triangle” is actually formed.
As Dariusz Kijanka, Poland-Ukraine Project Manager of the Baltic-Black Sea Economic Forum, noted: «During the working meeting, there were considered not only possible directions of cooperation and formation of portfolios of joint projects, in particular on the most relevant segments of EU-Ukraine cooperation and EU programs” Eastern Partnership “, but also it was identified proposals for a preliminary joint action plan. As a result of the negotiations, it was reached a preliminary agreement on the initiation, as a basic, of the partnership between the Baltic Sea & Space Cluster and the Baltic-Black Sea Economic Forum, aimed at developing cooperation for the benefit of all “forum” partners. In the development of this partnership, it is proposed to initiate additionally cooperation with the participation of Kherson State Maritime Academy, its science park and Szkoła Morska Sp. z o.o. of Gdynia»
Szkoła Morska Sp. z o.o. is the first private maritime school in Poland, established in Gdynia in 1998. Here you can get a higher education in a number of maritime professions. Szkoła Morska Sp. z o.o. is a founding member of the Polish Chamber of Maritime Commerce, a member of the National Forum of Non-State Education and the The Polish Maritime Technology Forum. It operates in the Polish Maritime Cluster, being in its authorities.