PKN ORLEN is building a strong multi-energy concern. Saudi Arabian Oil Company is a partner of the venture. The consolidation of PKN ORLEN with LOTOS and PGNiG, and, earlier, with the Energa Group, would be an opportunity to build an integrated and diversified fuel and energy group with a total market capitalization of around PLN 78bn.

A multi-energy capital group with a strong financial position will ensure Poland’s energy security as well as stable and attractive energy prices for customers. 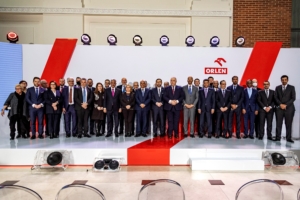 ‘The merger between PKN ORLEN and the LOTOS Group will mark the inception of a single strong group capable of delivering environmentally friendly energy to the Polish economy and meeting the challenges posed by the fuel and energy transition’ says Daniel Obajtek, President of the PKN ORLEN Management Board.

‘Our business objectives for oil and chemicals are closely aligned with PKN ORLEN, and we are exploring additional opportunities in the European petrochemicals market, as well as in R&D’ says Mohammed Al Qahtani, Aramco Vice President for Downstream.

LOTOS refinery and Port of Gdansk

The Grupa Lotos refinery is located near the Port of Gdańsk. Poland imports crude oil and fuels from the Middle East and other overseas countries through the Port of Gdańsk. LOTOS Exploration and Production Norge AS (LOTOS Norge) received 4 new exploration and production licenses. The Norwegian government announced its decision on January 18, 2022. Upon their acceptance, LOTOS Norge’s portfolio in Norway will increase to 34 licenses.

It was over 5 million tons more than in 2020. A year-on-year increase of 37.9%. 17 million tons – this is an absolute record of Naftoport, an organization dealing with fuel transshipment in Gdańsk.

Naftoport belongs to the PERN Group. It is a key company in Poland that ensures the diversification of crude oil supplies to Poland. It is the only sea crude oil transshipment terminal in Poland. It is one of the largest and most universal terminals for handling refined products. It is one of the largest transshipment terminals in the Baltic Sea region.

PKN ORLEN and Saudi Aramco have signed agreements opening up the possibility of strategic cooperation in both petrochemical and R&D projects. PKN ORLEN has guaranteed possible exchange of selected service stations for other locations in Slovakia and entry into a completely new market, that is Hungary. Following the transaction, PKN ORLEN would join the leading fuel retailers on both those markets – informed PKN ORLEN.

‘These acquisitions will support the diversification of Aramco’s product portfolio across the hydrocarbon value chain — including a focus on liquids-to-chemicals pathways. Our expanding global network of refineries and chemical joint ventures allows us to reach new markets with our products, and strategically place crude oil volumes across different geographies,’ says Mohammed Al Qahtani, Aramco Vice President for Downstream.

‘For MOL, the transaction is a major step in its strategic transformation journey commenced in 2016, which we fast-tracked last year with our updated strategy. The acquisition of ACG assets in Azerbaijan, the construction of a new polyol plant in Hungary, and the entry into Poland represent important milestones on the way to achieving our goals.

With this acquisition, we will gain a foothold in the largest economy of Central and Eastern Europe, reaching nearly 40 million potential customers. The Hungarians and Poles share historical experiences and have a common goal of ensuring secure energy supplies in Central and Eastern Europe. I believe that the North-South energy corridor will be further strengthened through this agreement,’ says Zsolt Hernádi, President of the Management Board and CEO of the MOL Group.

‘Selection of these investors and the agreements signed with them is a crucial step in the process of creating a multi-utility group. The consolidation is a response to the challenges of the future, also at a time of macroeconomic headwinds. We are confident that our contribution to building the group will help deliver ambitious investment and development plans based on both our refinery in Gdańsk and the competence centers built around the LOTOS Group,’ notes Zofia Paryła, President of the LOTOS Group Management Board.