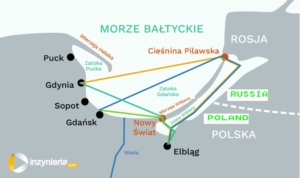 Journalists  of the Baltic Sea Publicists’ Club was on the construction of the channel to the Elbląg Sea Port. The canal makes the passage to the ports of Elbląg, Frombork and Tolkmicko independent. Ships and yachts will not have to cross the waters belonging to the Russian Federation in the region of Kalinigrad (Strait of Pilawa). The work progress is around 90 percent. Advanced in time: 80 percent and the time advance is about 5 percent – informed Mariusz Janczewski – deputy project director in the NDI/Besix consortium.

waterway connecting the Vistula Lagoon with the Gulf of Gdańsk

On October 18, 2019, the Maritime Office in Gdynia handed over to the Contractor – a consortium of N.V. Besix SA, NDI S.A. and NDI Sp.z o.o. – the area where works will be carried out as a part of the first stage of construction of a waterway connecting the Vistula Lagoon with the Gulf of Gdańsk. The contract will be implemented over 32 months – informed NDI. 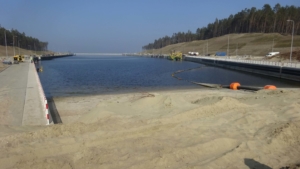 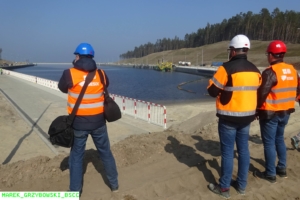 – There is a protective port behind the breakwater. The port is on the side of the Baltic Sea – the Gulf of Gdańsk. The port will be able to receive ships at two quays. Ships will be moored there, in front of the lock. Vessels with a draft of 5 meters will pass through the canal.

In the port, ships have water and food supplies. It will be possible to change the crew here. Such activities can be carried out in the port before entering the channel. Merchant ships, service ships, as well as passenger ships and yachts will be able to moor in the port. It is a standard seaport from the Baltic Sea. 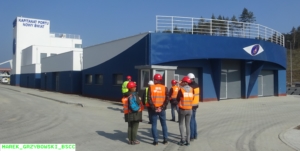 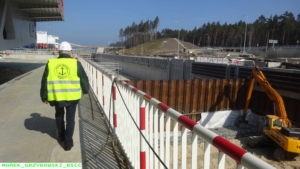 The shipping channel will be 1-kilometre-long and six-metre-deep. Ultimately, it is to enable vessels with a draft of up to 4 metres, length up to 100 metres and width up to 20 metres to enter the port of Elbląg. The construction of the channel through the Vistula Spit is to be completed in 2022. The investor is the Maritime Office in Gdynia. The implementation time from the date of signing the contract is 32 months. The investment is located within two voivodeships – Pomeranian Voivodeship and Warmian-Masurian Voivodeship. The following elements of the project are located within the borders of the Pomeranian Voivodeship, in the Sztutowo and Krynica Morska commune: the construction of a shipping channel through the Vistula Spit, the construction of a waterway in the northern part of the Vistula Lagoon (the border of the voivodeships passes through the centre of the Vistula Lagoon) and the construction of an artificial island. Within the borders of the Warmian-Masurian Voivodeship, the southern part of the waterway in the Vistula Lagoon is located in the commune of Tolkmicko, and the waterway on the Elbląg River with adjacent land areas are located within the Elbląg commune and the city of Elbląg.

Digging of the Vistula Spit