News
You are here: Home1 / News2 / News3 / Special Economic Zones are working on their strategies for the coming ...

The summary of the past – record-breaking in terms of the number of investments – year at PSI, SEZ operating strategies for the coming years and the issue of green energy production are the main topics of the online meeting of representatives of the MRiT management, headed by Piotr Nowak, the Minister of Development and Technology, and the presidents of all Special Economic Zones. 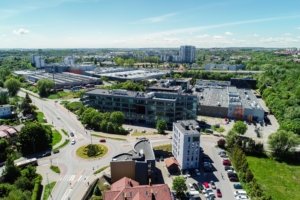 Deputy ministers of development and technology, Grzegorz Piechowiak and Michał Wiśniewski, also participated in the conversation with the heads of fourteen Special Economic Zones.

Special Economic Zones create an appropriate climate and legal and business environment, the aim of which is to attract and encourage entrepreneurs to locate new investments in Poland. The zones manage individual areas of the country and issue decisions to support new investments within the Polish Investment Zone. From September 2018 to the end of December 2021, a total of 1,521 such decisions were issued for a total of PLN 73.4 billion of the value of investments with a declaration of creating 31,569 new jobs.

Special Economic Zones have been the driving force of the Polish economy for many years. Initially, they were supposed to be a remedy for the socio-economic problems of our country, such as high unemployment. They are responsible for attracting new investments to Poland and implementing the most modern and technologically advanced solutions. Thanks to this, each year, Poland strengthens its position on the European and global market – said the Minister of Development and Technology Piotr Nowak.

It is best to measure the activity and effectiveness of Special Economic Zones by observing the pace and number of investments carried out by Polish and foreign companies. The best year in PSI’s history is behind us so far. We will continue to support and encourage entrepreneurs to implement new business projects in our country so that the years to come will be equally successful – added Deputy Minister of Development and Technology Grzegorz Piechowiak.

In a globalized world, Special Economic Zones are an important link in local development and affect the continuity and growth of investments. The zones may not only contribute to greater than ever respect for the natural environment, but also have a chance to become an important part of the vehicle that would enable the transformation of the Polish economy model to a low-emission one – said Deputy Minister of Development and Technology Michał Wiśniewski.

Over a quarter of a century of existence of the SEZ

Special Economic Zones were established on the basis of the Act of October 20, 1994 on special economic zones. Their tasks include accelerating the dynamics of regional development by attracting new investments and creating jobs.

Previously, the companies provided support only in the areas specified in the ordinance. From 2018, support – under the Polish Investment Zone – is available throughout the country. PSI is a natural evolution of the zone instrument, adapted to the realities of contemporary Poland. SEZs still play an important role in this system, as they issue decisions to support investments under the PSI.