News
You are here: Home1 / News2 / News3 / KIEL STOP. PRESS CONFERENCE AND PROCEEDINGS OF THE SEA-EU BOARD OF DIR...

At 7.30 am on the first of June, the R/V Oceanograf entered the port of Kiel. This marks the end of the first leg of the SEA-EU research cruise. In the coming days, the scientists will attend a press conference for the German press and perform some of the last surveys in the Baltic Sea. 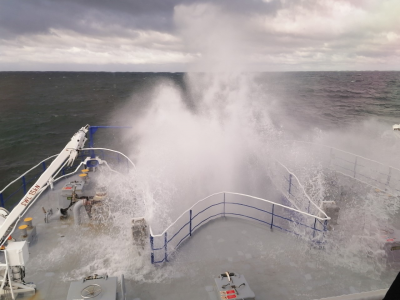 – ‘Near the mouth of the Vistula the wind gave us a hard time,’ – says Bartosz Drzewucki, the ship’s senior officer. – ‘The wave in the bow and the wind caused us a ten-hour delay. We were a bit bumpy, but Oceanograf has sailed to the Słupsk Shoal more than once, so we were prepared. This leg was relatively easy. The biggest challenge awaits us during the Brest-Kadyks leg, where we will be sailing through the Bay of Biscay.

Thanks to hydroacoustic research on the Gdynia-Kiel route, scientists have characterised different areas of the Baltic Sea bottom for greenhouse gases. This was non-invasive work and involved taking water samples in profile for later analysis for methane, carbon dioxide and nitrous oxide.

– ‘We will investigate further such areas only after we enter Spanish waters,’ – explains dr Jakub Idczak, the cruise’s chief hydrographer. The comparative study of gases contained in surface sediments is only one of the cruise’s work packages. The other two concern the occurrence of microplastics in the marine environment and air quality along European coasts.

The rectors of the University of Gdańsk – prof. dr hab. Piotr Stepnowski, prof. dr hab. Krzysztof Bielawski, dr hab. Anna Jurkowska-Zeidler, prof. UG and dr hab. Arnold Kłonczyński, prof. UG – also came to Kiel. The university authorities will take part in a meeting of the SEA-EU Governing Board. It was at this type of meeting in December 2021 that the idea of a research expedition along the coast of Europe was first floated.

On Friday, June 3, the R/V Oceanograf will set sail on a one-day cruise. On board will be scientists and students from Christian Albrecht University in Kiel. The next day, the UG ship sets sail for Brest in France.