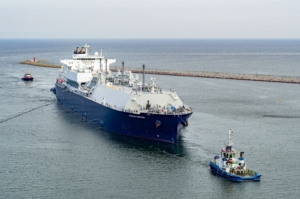 PGNiG announced that the new 8 LNG carriers will be used in cooperation with specialized shipping companies: Knutsen OAS Shipping and Maran Gas Maritime.

Equipment works are being carried out on the first two LNG ships. The gas installation is being assembled and the tanks are prepared for installation. The vessels were ordered by two shipping companies for PGNiG charters. The gas carriers Lech Kaczynski and Grazyna Gesicka are being built at the Hyundai group shipyard in Ulsan, while the third unit, the construction of which has just started, is being built at the Hyundai Samho shipyard.

15 LNG tankers are managed by Knutsen OAS Shipping, which started operating on the LNG market with a single LNG tanker in 2004. Knutsen has contracted 15 LNG carriers at shipyards. Four of them will be on the PGNiG charter.

MGM currently has a portfolio of orders for 11 new LNG carriers, which will be introduced to the services over the next 4 years. Four of them will be chartered for 10 years by PGNiG, with the possibility of extending the charter. At the moment, MGM manages a fleet of 45 gas carriers, most of which are under the Greek flag and 5 under the Marshall Islands flag. The average age of a gas carrier operated by MGM is 5 years and 6 months.