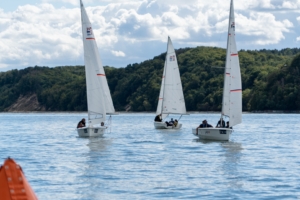 The 1st Tadeusz Wendy Maritime Business Regatta in the Gdynia Championship rank was part of a series of events celebrating the 100th anniversary of the Port of Gdynia, which began in September this year.

25 crews from maritime industry companies took part in the regatta. The crews of Stena Line Polska and BCT Gdynia, among others, participated. Yacht crews competed in the Yacht 2020 class.

– This year, the Port of Gdynia is celebrating its 100th birthday. We decided that this is the perfect moment to start a new tradition, port regattas – said Jacek Sadaj, president of the board of the Port of Gdynia. He also took an active part as a sailor in the regatta.

– We have decided to integrate the maritime industry, and there is no better opportunity for this than a joint regatta – said Aleksander Wicka, Marketing Director of the Port of Gdynia.

The first race was won by the team consisting of: Piotr Pawłowski, Ryszard Drzymalski and Jacek Przybylak from the Council of Stakeholders of the Port of Gdynia.