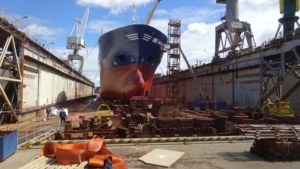 In 2021, the European scrubber market dominated. with a market share of over 30%, it was the leader and clearly ahead of other regions. But the regulations introduced and the SECA zone operating for years, as well as the restrictions announced in 2023 aimed at reducing sulfur emissions and other pollutants, force changes on the European scrubber market, according to the study by Acumen Research and Consulting (ARC).

– The North American marine scrubber market has taken the second largest position in the global market due to increased budget spending on modernizing ships and adapting to the requirements of ecological offshore service vessels – reports in Marine Scrubber Market, Share, Analysis Report and Region Forecast, 2022- 2030 “.

High gas prices and problems with its supplies may cause the demand for scrubbers to continue. This is good news for the Polish shipyards. Nauta and Remontowa have already installed scrubbers on a series of ships from European shipowners. With their experience and a good position on the market, both shipyards have good prospects until at least 2030. Crist, or maybe even Gryfia, may also enter the market with its technical facilities.