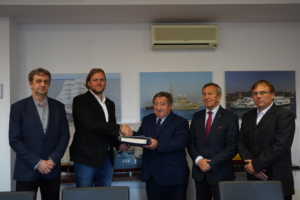 The official handover of the documents: Class and Convention Certificates for the ORP Mewa unit took place at the Remontowa Shipbuilding S.A. office. This is the last in a series of three modern ships of the 258 Kormoran II project.

– “Participation in projects for the Polish Navy allows PRS to gain valuable experience and expand our competences in shipbuilding. We will use them in subsequent projects related to the defense of the Republic of Poland, ”said the President of PRS SA, Henryk Śniegocki.

Documents confirming the completion of the classification supervision over the new construction were provided by PRS: President of the Polish Ship Register Henryk Śniegocki, Head of the Naval Ship Supervision Service of PRS SA Janusz Dilling and the Head of the PRS GDA2 Agency Grzegorz Rachwał. On the part of the Shipyard, the following persons participated: President of the Shipyard, Marcin Ryngwelski, and Member of the Management Board, Dariusz Jaguszewski.

It is planned to start construction of the next ships no. 4.5 and 6.