News
You are here: Home1 / News2 / News3 / It will take 100 years to replace ships with units using alternative fuel... 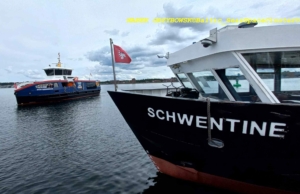 For several years, the global merchant fleet has been growing by about 3% annually, informs UNCTAD in a recent report. Therefore, it can be estimated that in mid-2022 the world fleet has already exceeded 106,000. ships.
In January 2021, it had 99,800 ships (with a gross tonnage of 100 tons and above) and a carrying capacity of over 2,134.7 million tons. It can therefore be assumed that the commercial fleet, introducing more than 1,300 ships into operation in recent years, has increased global GHG emissions by little in relation to the carbon dioxide emissions of the world economic powers.

– About 5.5% of the total gross tonnage of ships currently in operation and a third (33%) of contracted gross tonnage may or may be able to operate on alternative fuels. This also applies to LNG carrier operators, emphasize DNV analysts.

In numbers, it looks less optimistic. Currently, the operators operate approximately 1,350 ships powered by alternative fuels, of which 923 are ships with an LNG system. Almost 400 units are hybrid or electric. Only less than 20 ships use LPG systems, and only 11 use methanol to fuel their engines.