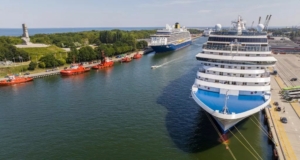 From April to September, cruise liners called a total of 79 times at the Port of Gdansk. The 2022 season should be considered very successful.

79 passenger ships moored at the Port of Gdansk. 29.5 thousand people came to Gdańsk on ships. tourists. So far, the record year in terms of calls has been 2018. At that time, 67 ships with over 30,000 passengers on board entered the Port of Gdansk.

– This season was  the best in the history of the port. It was a record for revenues from port fees. The revenues were about 2.5 times higher than the previous record from 2018 – says Michał Stupak, client manager at the Port of Gdansk Authority S.A.