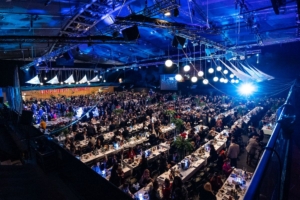 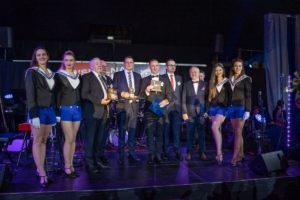 2060 guests from 184 companies attended the 22nd meeting of Pomeranian maritime business, which took place on October 14, 2022.

The Chapter of the National Chamber of Maritime Economy awarded the Gdynia Port Authority – Specjalna Bursztynowa Kaczka, on the occasion of the 100th anniversary of the port. “The Port of Gdynia is a symbol of Polish entrepreneurship, diligence and success”

Sunreef Yachts for launching a pioneering ship, the eco-catamaran Sunreef 80 Eco, which is a Polish deep-sea yacht powered by renewable energy sources.

Bursztynowy Ster, the award was given to Krzysztof Michnal, president of the Gdynia Maritime School, chairman of the Pomeranian branch of KIGM for “uninterrupted for almost 20 years involvement in activities for the Polish maritime economic self-government, as part of KIGM, the Pomeranian Entrepreneurship Council and the Educational Council.