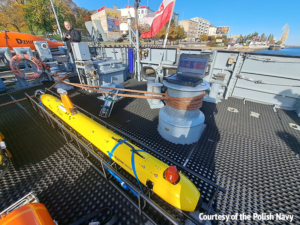 A global leader in the provision of marine unmanned systems,  Teledyne Marine – Vehicles announces that the Ministry of Defence of Poland has procured, through Remontowa Shipbuilding three additional GAVIA Autonomous Underwater Vehicles (AUV) for its next batch of Kormoran II Class new MCMVs.  The anticipated delivery of three systems will be added to the current GAVIA AUV fleet, which has been successfully operated by the Polish Navy for Naval Mine CounterMeasures (NMCM) since 2015.

To complement the GAVIA AUVs previously procured, the acquisition will include all required topside equipment, as well as the AUV operation and maintenance trainings.

In 2014, Teledyne Gavia completed a competitive tender process for the delivery of the first MCM AUVs for the Polish Navy, winning the contract on the basis of best value with conformance to the required functional and technical requirements.  Based on the Polish Navy’s experience, the GAVIA AUV has been selected once again, as the Navy is expanding its fleet of MCMVs.

With the imaging and navigation sensors listed above, the AUV will be able to gather high resolution, accurately navigated, sonar images while remaining submerged for several hours of continuous operation at survey speeds up to five knots. Each GAVIA AUV will be delivered with several field-replaceable battery modules (Teledyne Energy Systems, USA).  The combination of sensors ensures that the GAVIA AUV is ideal for mine countermeasures (MCM), as well as search and salvage operations, in continental-shelf waters and beyond. Future addition of a Reson T20 Multibeam Echosounder will provide expanded capability for pipeline tracking and inspection of critical infrastructure.GAVIA AUVs in Poland continue to be supported locally through Enamor Ltd (Gdynia, Poland), Teledyne Gavia’s official representative in Poland. Enamor is a research and production company focused on new technology and active in many projects in Poland in the fields of navigation, communication, hydrography and automation.