News
You are here: Home1 / News2 / News3 / Hydrogen on board. Norled is testing the way for zero-emission ships. Polish...

More than a year after receiving the Ship of the Year award, Hydra bunkered in December this year. .The ferry carries people and cars on the route between the Norwegian ports of Hjelmeland, Nesvik and Skipavik near Stavanger, informed me Erlend Hovland, Chief Technology Officer, Norled AS.

Norled has added a ship with hydrogen propulsion and hydrogen cells to its fleet with electric propulsion. The Norwegian operator consistently strives to use zero-emission ships in its fleet of 80 ships. Polish engineers, Polish design offices and shipyards also contribute to the process of decarbonizing shipping in the Scandinavian countries.

The ferry is 82.4 meters long and 17.5 meters wide and is powered by two Schottel SRE 340 LFPs. The ship can take 292 passengers and 80 cars. Scania DI16 075M engines driving power generators can be powered by hydrogen and biofuel. The propulsion system provides a speed of 9 knots. Since the launch of the ferry, these are still experimental cruises to check the economics of operating this type of vessel in sea conditions.

“It’s a test ship,” Victoria Coleman, editor of The Explorer, wrote on her blog. During the operation of the ferry, the ferry operator checks the solutions used for power supply and energy management, check the propulsion systems in marine conditions and power systems, energy production, and bunkering technology. 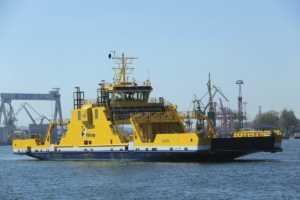 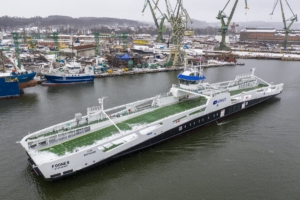 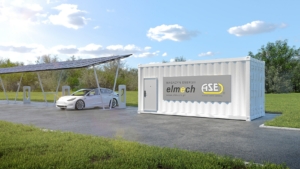 It should be emphasized that Polish shipyards contribute to environmental protection. Remontowa Shipbuilding has built four fully equipped double-sided ferries with battery propulsion. Ferries were directed to Festøya – Solavågen and Mannheller – Fodnes. The design was carried out by the LMG Marin design office, and the working documentation of the ship production was carried out by the Remontowa Marine Design office operating as part of Remontowa Holding.

Previously, there was a ferry from the Gdańsk-based Aluship shipyard, which was designed in the Nelton design office from Pruszcz Gdański. The Ampere ferry was built on the basis of the ZeroCat catamaran model. The ferry was honored with the title of Ship of the Year at the SMM Hamburg fair and received the Ship Efficiency Award.

A new quality in the development of electric ships

A new quality in the development of electric ships is created by the StoGda Ship Design & Engineering design office together with the CRIST shipyard. The Elektra double-ended hybrid ferry won the international “Ship of the Year Award” at the Marine Propulsion Awards 2018 organized by the “Marine Propulsion & Auxiliary Machinery” magazine. The award was presented at the maritime industry conference “Sulfur Cap 2020”.

Poland is prepared for a comprehensive introduction to the market of zero-emission ships with electric charging or bunkering systems. The zero-emission ship production hubs and the GreenTech hub operating in the Baltic Sea and Space Cluster (BSSC) are able to ensure the supply of innovative units for the needs of operators of electric, hydrogen or other low-emission fuel ships.

CRIST shipyard is the coordinator of the BSSC zero-emission ship hub. CRIST has the competence to manufacture and the potential to position such units on the international market.
The ASE Technology Group is the coordinator of the GreenTech hub BSSC. The ASE Group is competent to build hydrogen fueling stations and energy storage facilities with a system for integrating and managing energy obtained from ecological sources, including photovoltaics, wind farms, biogas and others (e.g. sea waves, hydrogen).

https://www.bssc.pl/wp-content/uploads/2023/01/HYDRA-NORDLED-1-1-3-PHOTO-Norled.jpg 532 729 Marek Grzybowski https://www.bssc.pl/wp-content/uploads/2018/12/logo-bssc.png Marek Grzybowski2023-01-06 20:36:442023-01-08 14:56:22Hydrogen on board. Norled is testing the way for zero-emission ships. Polish engineers have their share in this
The European Union fish market. Poland below average in consumption, above average... Gdańsk University of Technology received PLN 70 million in funding for infrastructural...
Scroll to top