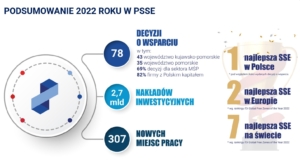 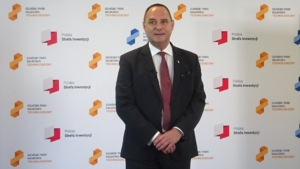 The Pomeranian Special Economic Zone is a leader in Poland in 2022. In the fDi Global Free Zones of the Year 2022 ranking, the Company was ranked 2nd among special economic zones in Europe and 7th in the world.

The Pomeranian Special Economic Zone became the best economic zone in 2022 in Poland, providing support to 78 investment projects with a total expenditure exceeding PLN 2.7 billion. The investments will contribute to the creation of 307 new jobs and the maintenance of over 10,250 jobs.

Thanks to the functioning of the Polish Investment Zone, enterprises can afford new projects in times of unstable situation on the global market. The geopolitical situation has forced entrepreneurs to be more careful when planning new investments. This is the reason for the slightly lower rate of applying for support in 2022 compared to 2021.

– Our region is coping well with the new geopolitical situation, as evidenced by the largest number of investment decisions issued in the country. In the Pomeranian and Kuyavian-Pomeranian Voivodeships, 69% of decisions were issued to companies from the SME sector, while companies with Polish capital accounted for as much as 82% of all decisions – says Przemysław Sztandera, President of the Pomeranian Special Economic Zone.