News
You are here: Home1 / News2 / News3 / Procedure for the sale of PG Eksploatacja shares closed, without selecting... 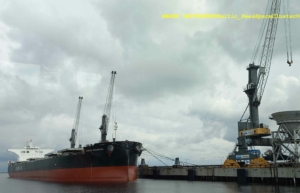 The procedure for the sale of shares in Port Gdański Eksploatacja S.A. has been closed, without selecting a winning bid. This decision has been made by the Port of Gdansk Authority S.A., the owner of PG Eksploatacja S.A. in view of the unstable geopolitical situation, a fundamental change in the company’s situation and the resulting significant increase in its market value, as well as unsatisfactory bids from the entities admitted to the negotiation stage.

Early in 2021, the Port of Gdansk Authority S.A. decided to sell its full stake in Port Gdański Eksploatacja S.A. (hereinafter referred to as PGE S.A.) The company operates on an area of over 89ha in the Inner Port and carries out handling operations in 5 quays.

The invitation to negotiate the sale of shares in PGE S.A. was published on the 1st of March 2021. Responses to the invitation were submitted by 7 potential investors. ZMPG S.A. decided to qualify 5 entities for the next stage of the procedure, i.e. for the due diligence of PGE S.A. Four potential investors paid on-site visits and met with the Boards of PGE and ZMPG, as provided for in the procedure. Finally, 3 bids were submitted. The Board decided to qualify 2 companies for the negotiation stage. In June 2022, ZMPG granted one entity temporary exclusivity to participate in the negotiations.

The Bid Evaluation Team analysed the bids of the potential investors, taking into account the updated valuation of the company’s shares as at late August 2022, including the position of the Privatisation Advisor, and the current geopolitical situation. Analysis showed that the value indicated by the valuation of PGE S.A. significantly exceeded the value indicated in earlier valuations and the amount of investors’ bids.

Therefore, the Port of Gdansk Authority asked the investor granted exclusivity for negotiations, until the 31st of December 2022, to take into account the new situation of the company and to review its bid by the 15th of December 2022. The Investor’s bid, received by ZMPG within the indicated time limit, is below the company’s market value. At the same time, the Investor did not change its assumptions regarding the originally planned investments, that it would have been required to carry out after the conclusion of the agreement, although the company’s needs in this respect had changed significantly.