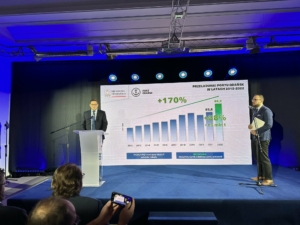 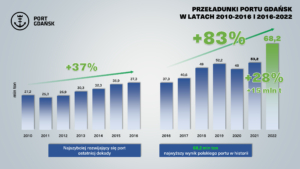 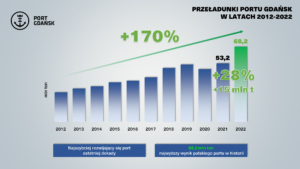 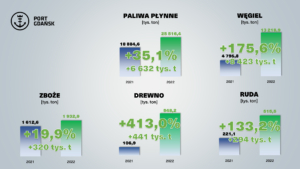 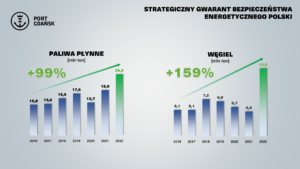 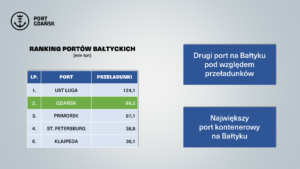 Transhipments at the Port of Gdansk increased by 83 percent. in the last 6 years, achieving in 2022 the absolute best result in history – 68.2 million tonnes. Compared to last year, it is more than 28 percent. growth. This record was achieved by reloading energy resources.

– It was a fantastic year in Polish seaports. The transshipment record from 2021 was spectacularly broken. The transhipment results clearly show how good the condition of the three largest Polish ports is. In total, they handled 133 million tons of goods. That’s 18 percent. more than in 2021 – said Marek Gróbarczyk, Deputy Minister of Infrastructure.

Polish ports passed the exam in 100%. – On February 24, 2022, when Russia attacked Ukraine – said Grzegorz Witkowski, Undersecretary of State at the Ministry of Infrastructure.

– We faced serious challenges resulting from the economic consequences of Russia’s aggression against Ukraine and the closure of Poland’s eastern border to supplies of raw materials, especially coal. Seaports, including Gdańsk, had to take over the volume of these goods, which until then had been imported by land. We managed to meet this task. Thanks to the port’s investments implemented in recent years, such as modernized quays and storage yards, today we can sleep peacefully and not worry about the temperature in our homes, said Łukasz Greinke, President of the Port of Gdansk Authority SA.

We are constantly strengthening our position on the Baltic Sea – we are ranked 2nd overall in terms of transshipments – said President Greinke.