Smart Port International Conference was held in 24th September 2020. Conference was organized by Space Sciences Committee Polish Academy of Sciences / Gdańsk Branch in cooperation with the Baltic Sea & Space Cluster and the Polish Space Agency (POLSA).
The conference was conducted in a hybrid system. About 70 people attended the conference via the internet. About 20 people participated in the conference in the University of Business and Administration in Gdynia auditorium. About 10 representatives of the administration, about 30 representatives of business, and professors and students, engineers, lawyers, economists, computer scientists, professors of management participated in the conference SMART PORT, The merged sea & space network.

The guests were welcomed and conference were opened by Prof. Edmund Wittbrodt, Chair of the Space Sciences Committee, Polish Academy of Sciences, Gdansk Branch; Gdańsk University of Technology and Prof. Marek Grzybowski – Vice-President of the Baltic Sea & Space Cluster (BSSC) Board, Project Department Manager. This is another in a series of conferences during which we discuss how the maritime economy develops using the latest technologies, including information and space technologies. Conferences organized by the Space Sciences Commission of the Polish Academy of Sciences guarantee the transfer of the latest knowledge in the field of marine and space sciences – said prof. Wittbrodt. Conferences on autonomous ships, underwater drones and the use of space technologies in sea research are a significant achievement of the Space Sciences Commission.

The Baltic Sea and Space Cluster is a key cluster in the Baltic Sea region specializing in the integration of the scientific community, business, administration and society in the use of modern marine and space technologies – said prof. Grzybowski. We focus on knowledge transfer internationally. We support projects in the Baltic Sea region focusing on the use of modern technologies in environmental protection. Ecoprodigi is such a project. We also participate in projects that provide a strong technological advances in the maritime economy. GALATEA is such an interdisciplinary project. It supports SMEs innovative projects in the Blue Growth Economy. The ZEVInnovation is an another project in which the Cluster is involved. This project focuses on the development of the zero-emission ships (ZEV). Project partners will be strengthening transnational co-operation, knowledge and technology transfer in development of electric vessels and fostering innovations in SME’s in this project together with high-class partners from Croatia and Norway.

The main session was opened by Bartosz Bartoszewicz, Vice-Major of the Gdynia City, who discussed the concept of sustainable development of Gdynia as a smart city. Gdynia is one of the youngest port cities in Europe. It is a city that is growing rapidly in a sustainable way. Environmental protection and sustainable development are among the priorities of the city council. 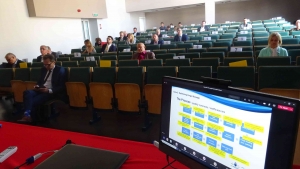 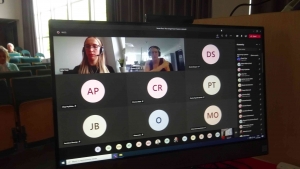 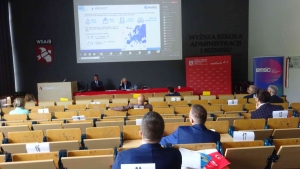 GALATEA, it means: grow and accelerate your smart projects in new value chains of the european blue economy – informed Océane Le  Bot, Project Manager, Pôle MerMéditerranée. The project funded by the European Union under its INNOSUP-1 programme, was launched in June 2020 giving continuity to the successful project NEPTUNE which ended in December 2018. GALATEA brings together the cooperation and experiences of the organizations with high innovative potential, including ICT, aerospace and maritime clusters and research and technology organizations  from 5 European countries: France, Greece, Romania, Poland and Spain. The project will run for 30 months until November 2022 under de coordination of Pôle Mer Méditerranée, a strong French maritime cluster. The overall objective is to develop new cross-sectoral and cross-borders value chains supporting innovative SMEs to foster the development of Blue Growth key industries in Europe. This development will be driven by the integration of technologies and know-how from aerospace and ICT sectors, to the following domains: ports, ships, shipyards and maritime surveillance – informed Océane Le  Bot in a comprehensive presentation.

Tomasz Lisiecki, Chairman Of The Board, New Competencies Center asked about the use of Virtual Reality in activities related to increasing eco-efficiency at all stages of the vessel lifecycle. Michał Specjaliski from REUBEN was interested in how small and medium-sized enterprises are supported in the projects. Milla Harju said that the solutions adopted in Ecoprodigi use the latest technologies, including artificial intelligence. Oceane LeBot said: the GALATEA project has the main task of supporting innovative small and medium-sized companies operating in maritime clusters. Milla Harju said similar goals are being adopted by the Ecoprodigi project. 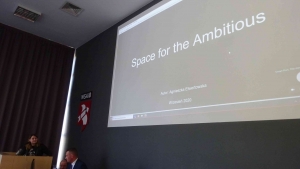 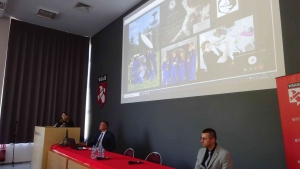 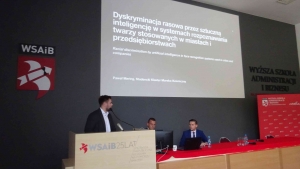 Young scientists, students and representatives of startups participated in the “Young Stars” session (moderator: Phd. Paweł Chyc). An interesting concept of the Autonomous Airships in the service of sea ports was presented by Mateusz Dyrda, Robotics Association SKALP and Digital Innovation Hub dih4.ai. He presented an idea of the Sterodrone. Its most important advantages are: the drone is fully autonomous, also in the event of an emergency landing, the drone has the ability to stay in the air for several days, not minutes. The drone uses artificial intelligence to optimize energy consumption. Agnieszka Elwertowska, PW-Sat 3 Project. presented her activities in space projects. Agnieszka spoke about participation in virtual space flights and about her participation in trainings for a flight into space as part of an international project. The Career Astronaut Competition initiative is led by AdvancingX, from California. The 5 year projekt currently includes engagement and training of the Career Astronaut Candidates from 92 countries.

The prospects of building a autonomous external port discussed  Krystian Zagrobelny, University of Business and Administration in Gdynia. Unmanned aerial systems for harbour’s critical infrastructure monitoring presented representant of the  Pelixar S.A. The racial discrimination by the artificial intelligence used in face recognition systems spoke in an interesting lecture Paweł Mering, Vice-President of the Student Sea-Space Cluster.  Views on the producer’s liability for damage to port infrastructure in autonomous seaports presented Adam Labuhn, University of Business and Administration in Gdynia.

Smart Port Applications’ Session (moderator: Prof. Marek Grzybowski) was opened by the Port of Gdynia presentation.  Smart Port Gdynia solutions has been widely discussed by Beata Szymanowska, Department Manager, Technology Research and Development Department, Port of Gdynia.  The RTK system provides accurate information on ship traffic parameters. It uses two satellite antennas, thanks to which the exact position of the ship is obtained. The port of Gdynia chose a air pollution monitoring system developed by SeaData.  There are six IT-related sensors that register air pollution in Gdynia. The YetiSense air quality system monitors air emissions in real time – informed Beata Szymanowska. The port simulator has been launched in the Experiment Center. LNG bunkering has been implemented in the Port of Gdynia.

Smart Solutions in the Port of Hamburg  presented Maciej Brzozowski, Port of Hamburg, Director of the branch in Poland. He has discussed this solutions in numerous examples. Why the port should be smart?- asked Maciej and answered: Because the current system is sub-optimal… The Smart Port in Hamburg is being developed comprehensively. Smart Port focuses on optimizing the following activities: internal processes on a terminal (higher operational excellency, less emissions),  terminal’s cooperation with its environment (better accessibility,  higher visibility), optimization of port processes (management of port resources, better communication – PCS), optimization of processes in a transportation chain (management of the whole transportation chain). SmartPORT is not so much a system as a concept based on intelligent management of limited resources. SmartPORT increases efficiency, minimizes energy consumption and harmful emissions – underlines Maciej Brzozowski.

Research Session (moderator: Prof. Zdzisław Brodecki) opened Prof. Tomasz Bąkowski, University of Gdańsk, lecture about legal aspects of the spatial planning and development in Polish seaports. Maritime spatial planning of the Polish maritime areas were the subject of the lecture Prof. Maciej Nyka, University of Gdańsk. Interesting, original  and extensive interpretation of the impact of “Revolution 4.0” on the development of port transport hubs presented  Prof. Bohdan Jeliński, University of Business and Administration in Gdynia.  Concept of the innovative security infrastructure of the port of Gdynia are the result of research PhD Wojciech Wosek, Phd Ewelina Parysek, and Paweł Wawrzyniak, University of Business and Administration in Gdynia. Three pillars of u-space were discussed: legislation, infrastructure, products and services.

PhD Magdalena Konopacka, University of Oslo, University of Business and Administration in Gdynia, the issues of offshore pipelines on the Baltic Sea from the legal point of view discussed extensively. The relative benefits per region compared to the baseline are presented in detail.  On various aspects of the financial security highlighted in an interesting lecture Prof. Andrzej Drwiłło and PhD Anna Reiwer-Kaliszewska, University of Business and Administration in Gdynia. Human psychology in outer space was presented by Prof. Marcin Dornowski, Gdansk University of Physical Education and Sport. There is an announcement of an interesting research by people determined to be active in space, such as Agnieszka.

The conference achieved the goals expected by the organizers, the Committee of Space Sciences of the Polish Academy of Sciences in Gdańsk and the Baltic Sea and Space Cluster – said Prof. Edmund Wittbrodt in closing remarks. Interesting, mature, often far-reaching scientific and business solutions were presented.

The wide representation of academics and business representatives contributed to the knowledge transfer. The interest in the conference was very high among representatives of the administration, scientists and business from Poland and abroad. This shows that Smart Port is an important topic for managers and decision makers. An additional advantage of the conference is the fact that it was held in Gdynia, a dynamic port city in the Baltic Sea region.  It is also important that the conference participants were hosted by a private University of Business and Administration in Gdynia. There is a very important conclusion from the conference. The future sea port must be smart? No. Today’s sea port must be smart. Photo: Marek Grzybowski