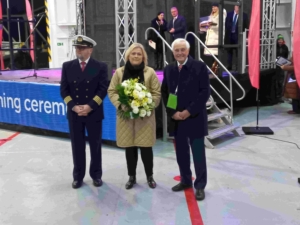 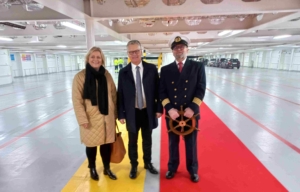 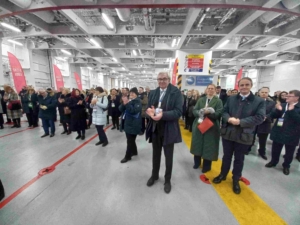 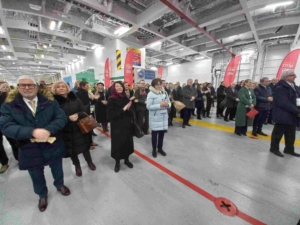 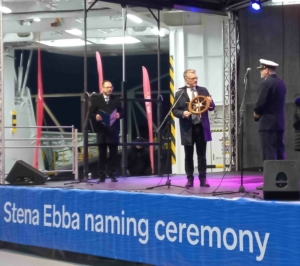 The naming ceremony for the Stena Ebba ferry in Karlskrona, Sweden, took place on January 11 this year.

– I give you the name Stena Ebba –  said Ulrica Messing, Blekinge Voivode Governor, at the ship’s christening, which took place at the Ferry Terminal in Karlskrona, Sweden. A bottle of champagne was smashed against the side by the ship’s godmother.

The ceremony was attended by representatives of many Polish and Swedish companies from the maritime business, as well as local government and state institutions from Poland and Sweden, as well as members of the Baltic Sea and Space Cluster.

Stena Ebba is one of the largest Ro-Pax ferries in service on the Baltic Sea. The ferry is 240 meters long. The ship has 3,600 m of load line and can accommodate 200 cargo units. The ship has room for 1,200 in 263 cabins. The interior of the ship was designed in the Scandinavian style. Panoramic windows allow you to observe the sea to the horizon. 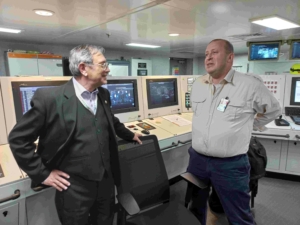 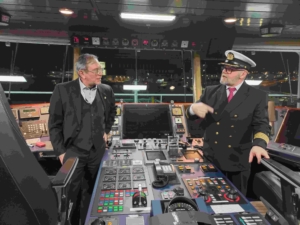 The Stena Ebba ferry is energy efficient ship thanks to its optimal hull design. MAK engines can be powered by 3 types of fuel. Marine low sulfur fuel, methanol and gas.

Wärtsilä aggregates with generators can also be used to propel the ship. Then the ferry sails like an electric ship. The ferry can be powered by electricity from the quay while in port. All these solutions reduce the emission of pollutants, CO2 and heat into the atmosphere.

– Today, with the inauguration of Stena Ebba on the Gdynia-Karlskrona service, as well as the earlier introduction of the sister ship Stena Estelle, we are starting a new stage in the development of our connection – said Marek Kiersnowski, Managing Director of Stena Line Polska.

– We offer our customers the most modern ferries of this type on the market. This will greatly improve the comfort of sea travel for our passengers and will enable a further increase in transport traffic. This is very important for our clients and regions in Poland and Sweden that we connect – emphasized Pedro Canchaya, Regional Travel Manager, Baltic Sea South and Baltic Sea North, Stena Line.

– The Port of Gdynia has built a new public ferry terminal to increase the comfort of service for passengers and transport companies – emphasized Jacek Sadaj, President of the Management Board of the Port of Gdynia Authority.

The new ferry terminal in Gdynia provides comfortable conditions for servicing passengers, trucks and ships. Passengers board the ferry through a fully sheltered passage. Trucks, buses and passenger cars enter the ferry via convenient entrances. Ships can be supplied with electricity from a special charging station. The 240 m long ship conveniently docks at the quay.

– The construction of the Public Ferry Terminal is the largest investment implemented in the Port of Gdynia for almost 50 years. The new Public Ferry Terminal makes it possible to handle much larger passenger ferries. The terminal increases the port’s handling capacity in terms of ro-ro and ferry services, says Kazimierz Koralewski, vice-president of the Port of Gdynia Authority S.A.

The transfer of Stena Line’s operations to the Public Ferry Terminal in Gdynia enables us to introduce much larger ships. The new terminal allows vessels up to 240 m long, such as E-Flexer class ships, to be moored there. The first of them, Stena Estelle was start the service from Gdynia this summer – says Marek Kiersnowski,  Managing Director of Stena Line Polska.

Stena Line has been present in Poland for over a quarter of a century. Ferries with a characteristic red chimney connect Gdynia with Karlskrona in southern Sweden. Every year, several hundred thousand passengers travel this route using one of three ferries: a ship with a wide range of attractions for passengers, Stena Spirit, and two new E-Flexer class ferries, 240 m long, taking both passengers and freight. These are twin units named Stena Estelle, which started operating in September 2022, and Stena Ebba, which joined the fleet in January 2023.