News
You are here: Home1 / News2 / News3 / University of Gdańsk the best university in Poland in supporting sustainable ... 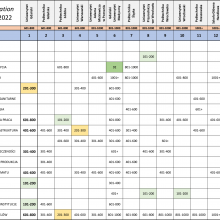 It is with great pleasure that we present to you the results of the Times Higher Education Impact Rankings published on April 27, 2022, where the University of Gdańsk has moved up 200 positions globally compared to last year and has been ranked the highest among all evaluated Polish universities. The ranking comprehensively assesses the policy and activities of universities in the implementation of the 17th UN Sustainable Development Goals. It is currently one of the most prestigious, complex and developing rankings, as its subject matter is of strategic importance for many universities. The University of Gdańsk is becoming an unquestionable leader in this area in Poland.

– ‘Advancement by 200 positions in the general global ranking, first place among evaluated universities in Poland, advancement by 100 positions and the highest position in the country in the implementation of the objective 5. Gender equality, extremely strong leadership in the objectives: 16. peace, justice and strong institutions; 11. sustainable cities and communities; 14. living underwater, podium for objective 13. climate action – a huge success in this year’s Times Higher Education Impact Ranking,’ – informs mgr Katarzyna Gregorowicz-Bielawska, Rector’s representative for rankings.

– ‘The highest position in Poland, promotion and high ranking in the world, taking into consideration the huge interest in the ranking and huge competition – is undoubtedly a reason to be proud. It is also a signal that the vision of the University of Gdańsk as a responsible and socially engaged university, which intensively develops relations with various stakeholders and involves the widest possible group of citizens and organisations in the process of creating, transferring and disseminating knowledge for the common, widely understood good of people, the region and the world, is being realised in the right way,’ – comments UG Rector prof. dr hab. Piotr Stepnowski.

– ‘The results of the ranking show that the University of Gdańsk is an organisation deeply aware of the challenges posed by the world, which are comprehensively described in the sustainable development agenda. What’s more – we are a university that is perfectly capable of responding to these challenges, both in a global context, by taking care of the environment, the climate, the water ecosystem, as well as in a local context, by including the University in the sustainable development of the city, through numerous so-called “equality actions”, promoting the presence of women in science and the life of the University, taking care of the well-being of each individual making up our University community. We are delighted to have been recognised. We are not slowing down. We are working all the more intensively to co-create a better world. Later this year a special report dedicated to this activity of the University will be prepared and presented to you,’ – adds the Rector.

Katarzyna Gregorowicz-Bielawska, the main author of the ranking report, talks about the road to success:

– ‘The data presented in THE Impact ranking covers the full spectrum of organisational, research and educational activities of universities. Obtaining and compiling data for the ranking requires a thorough analysis of all university activities (both in terms of conducted research, education, as well as cooperation with the social and economic environment or university’s actions as an employer). The collected information should then be skilfully interpreted and correlated with challenges in the framework of particular objectives formulated in the form of a detailed, almost two-page ranking methodology. This all adds up to a very comprehensive report (several dozen pages!) which, together with the raw data or evidence of implementation (attachments), is submitted to the ranking organisation for evaluation. It is a big challenge, many weeks of intensive work – all the more reason for me to feel great satisfaction if this is the final result.’

This year, data for the ranking was provided by many units of the University, including the Centre for Sustainable Development of the University of Gdańsk, which, under the supervision of prof. Sylwia Mrozowska, developed, among other things, materials for Goal 13: Climate Action (ranked 3rd in Poland out of 10 reporting universities) and whose initiatives will undoubtedly be presented in subsequent ranking reports, which bodes well for the position’s growth in the upcoming years.

The results of Polish universities in THE Impact Ranking 2022 are presented in the attached table:

Table with results from the attachment