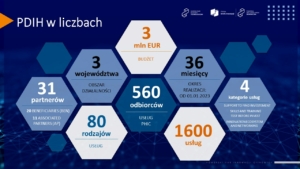 On December 2, 2022, the Pomeranian Special Economic Zone signed a Grant Agreement with the European Commission for co-financing the Pomeranian Digital Innovation Hub project.
The project is implemented as part of the Digital Europe Programme, one of the assumptions of which is the establishment of the European Network of Digital Transformation Centres. In Poland, 1 ️ 1 ️ centers will be created, including ours – as the only one in Northern Poland.

Around 200 such Hubs will eventually be created throughout Europe.
PSSE is the Project Coordinator and Consortium Leader consisting of a total of 31 Partners.

The value of the project is approx. EUR 3 million, 50% was obtained under the Grant Agreement. Another 50% will be obtained at the stage of the national competition, which will be announced by the Ministry of Development and Technology / Polish Agency for Enterprise Development, probably in the first quarter of 2023.
The implementation of the project will last 3 ️6 months – we start after the New Year, but you will be able to use our services in the middle of the year.