News
You are here: Home1 / News2 / News3 / Fish will save the world from hunger? 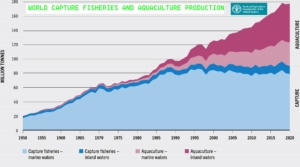 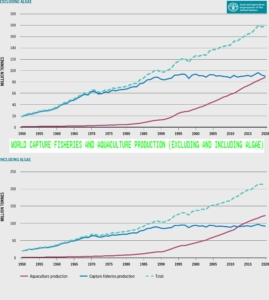 Total fisheries and aquaculture production (excluding algae) has increased significantly over the past seven decades, from 19 million tonnes (live weight equivalent) in 1950 to a record high of around 179 million tonnes in 2018, according to the latest 2022 FAO report .

This means an annual increase in fish weight (live weight) by 3.3% on average. In 2020, fish production increased by 0.2%, reaching 178 million tonnes. The value of revenues from the sale of catches and production of fish and other products of the sea and inland waters in 2020 was estimated at USD 406 billion, of which USD 265 billion came from production aquaculture, FAO experts have determined.

The use and processing of fishery and aquaculture products has changed significantly in recent decades. In 2020, 89% (157 million tonnes) of world production (excluding algae) is for direct human consumption. In the 1960s, 67% of the catch and production of fish farms was used for consumption.