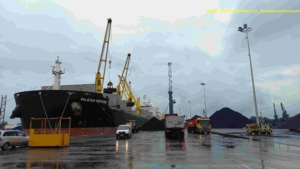 Russia’s attack on Ukraine and the sanctions introduced by EU countries resulted in radical changes in coal transport chains in 2022 on a global scale. Polish ports also joined the new system of sea connections under the influence of decisive changes in the sources of coal acquisition on the international market. The bulk terminals of Gdańsk, Gdynia, Szczecin and Świnoujście quickly adapted their technical and organizational potential. Polish ports joined the transshipment of coal in import relations.

Periodic shortages of gas and oil on the international market resulted in increased demand for coal. Global coal consumption increased by 1.2% and reached a record level of demand in 2022, according to a report by the International Energy Agency (EIA).

A new record for coal consumption reached 8,025 million tonnes in 2022. This was slightly above the level of 2013, when 7,997 million tonnes were used for energy, industrial and consumption purposes. The lower demand growth in 2022 is largely a reaction to the economic slowdown in leading industrial regions, including China.

The World Economic Forum highlights that only “about a third of the world’s electricity generation capacity now comes from low-carbon sources, with 26% coming from renewables and about 10% from nuclear power. The other two-thirds come from fossil fuels that emit greenhouse gases, such as coal, gas and oil.”

Coal ships will sail for many more miles and ports will handle millions of tons of coal before economies switch to renewable or nuclear power.