Innvative technologies used in offshore and the logistic and transport cluster – this topic was the subject of a meeting between representatives of the Wartsila company and representatives of clusters and maritime business companies. The meeting was held on May 7 in the Baltic Port of New Technologies operating within the framework of the Pomeranian Special Economic Zone. Visit in the Construkctors’ Park is the important part of the meeting. 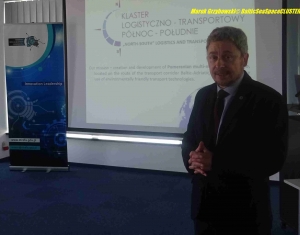 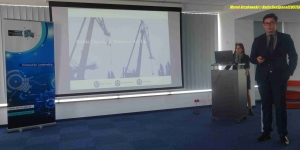 During the conference, representatives of the Wartsila company presented the most important areas of activity in the field of maritime transport. Today’s visit to Poland is aimed at establishing contacts aiming at the development of innovation in the production of ship propulsion, optimization of shipbuilding and production of autonomous ships – Andrei Voinigescu, General Manager, Business Intelligence, Business Development, explained.

The activities of the North-South Logistic and Transport Cluster were discussed by Marek Świeczkowski, the board’s management board, and the activity of GLobal Maritime was discussed by Karol Lewandowski, Senior Engineer.

The business of Hydromega was presented by Mirosław Michałowski, Commercial Director, who said, among others: Our company in partnership with the CRIST shipyard and RHS, MPL Techma and GS Hydro companies has delivered a modern, fully automated Ro-Ro system, designed to service the transport of wheeled vehicles. Our company protects the fast growing demand in the area of maritime economy by the production potential which we launched in 2016 on the shipyard areas in Gdynia. 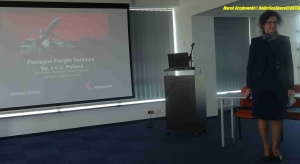 The production of Crist was donated by Tomasz Wrzask, PR officer; the use of RFID systems in logistics based on the example of ISS RFID solutions was discussed by Jakub Kownacki, CTO, Tachniczny Director, and global forwarding activity on the global market was discussed by Barbara Niwczyk, General Manager. B2B operations of the Baltic Sea & Space Cluster and participation in international projects were presented by prof. Marek Grzybowski, President of the BSSC Management Board, who informed that BALTIC SEA & SPACE CLUSTER (former POLISH MARITIME CLUSTER) is an important Maritime and Space Cluster in Central and Eastern Europe, an active maritime cluster player in the Baltic Sea Region and the EU, as well as a member of the  United Nation Global Compact and The European Cluster Collaboration Platform. The BALTIC SEA & SPACE CLUSTER (BSSC) focuses on transferring knowledge and organizing business, science and administration cooperation in a global and regional scale. The cluster thinks globally and acts globally. BSSC is an effective promoter of the  Polish Maritime Industry and Space Technology and utilizes Polish coastal location as a national treasure. Cluster acts as a partner and a participant in numerous endeavors regarding EU maritime and space economy, including by creating it as an equivalent of the national and European intelligent specialization. Cluster also interacts in the International Ocean Governance programme.

BALTIC SEA & SPACE CLUSTER are active in Poland as an expert in projects :